CISB StageCats first production of the 2017-2018 school year was a great success! “Waiting in the Wings” invited 4 sold-out audiences behind the red curtain, in the wings of the school’s auditorium, to experience all the anxiety and nostalgia actors feel as they prepare for their big moment in the spotlight.

This concept – a play about preparing for a play – was the inspiration from the beginning stages of this original production. This basic idea has transformed and evolved into the a fully realized production through a collaborative process called ‘workshopping’. During May and June of last year, a group of seasoned StageCats met multiple times to ‘workshop’ original ideas through discussion, improvisation exercises and theatre games. After these meetings, the script was written using the big ideas and even specific dialogue these students developed. In fact, there were a number of scenes in the play that are taken word-for-word from moments improvised by the actors and those who are work behind the scenes. Plus, this was the first StageCats show in which the lighting design was created independently by a student (the incredible Samuel Li) without assistance from teachers!

This collaboration between students and teachers to make an original play with original music made “Waiting in the Wings” a truly unique and rewarding experience. The process has shown again and again how much our students have grown and how capable they are to produce meaningful theatre using their own ideas, experiences and artistic vision.

“Waiting in the Wings” played in the CISB Auditorium from September 20th to 23rd. 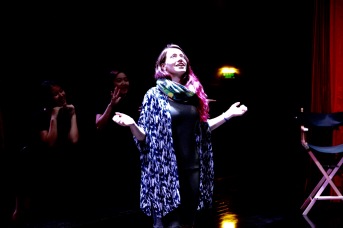